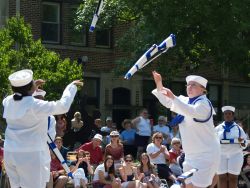 Amanda Lefevers says she loved her 10 years on the Angel Drill Team. “The discipline was great and you get a sisterhood with the girls on the team.” The Angels dedicate many hours to training with Chief Nathaniel Hamilton. Toitoya Leek says camp week discipline, “Makes you stronger… We outsing the Navy men with our cadences.” The Angels have earned hundreds of trophies and 23 national championships, and they fundraise year-round because the travel schedule is both expensive and extensive. Tavay Edwards says, “We practiced soooo hard for the Apollo, but once we go on a trip it’s just all fun.” Tavay says, “Good qualities were instilled in me through the team. I help Chief whenever he needs me. I’m trying to give to the girls what Chief gave to me.” The annual team tryouts are open to any Lake County girl. Chief Hamilton says leadership and patriotism are essential Angel qualities, as is being well-rounded.

Band of the Black Watch: First Place 2006 in the Band Category 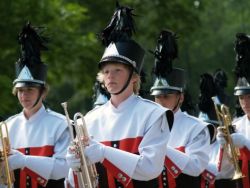 Black Watch Band Director Ken Wiele says, “The community in Lake Bluff always welcomes us, and it’s the highlight of our day…The crowd is always in real good spirits, and Lake Bluff’s route is just so intimate, it’s a hometown-square type of location.” It’s a long day for the 120 high school students in the Black Watch. They leave early from Kenosha for the 10AM parade start time in Lake Bluff, the Skokie parade at noon then Morton Grove at 2PM. Band member Katie Gromacki says she “loves doing the parades and hanging out all summer with friends.” The band’s performance season begins with April rehearsals, and the summer schedule features more concerts than marching. The week of band camp includes 6 or 7 hours of practice a day. Katie says it’s worth it “to get to see it all come together…it’s really cool to see all the people cheering, except of course, we really do have to look forward when we march!” 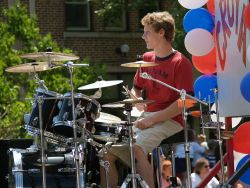 Every year CROYA builds an old-fashioned float with a truck pulling a decorated flatbed with a rock band. This year the back of the trailer featured pictures of the student executive committee, laid out Brady Bunch style. David Blowers, who played in the band on the float, says “We were trying to get across that it’s a kid-run organization” by showing pictures of the CROYA Bunch. His brother Stephen Blowers marched with CROYA, too, saying “We have a lot of people to build the float, so it’s a lot of fun.” Mat Engel, who played in the band, too, has worked on the float for six years in a row. Matt says, “It’s a good way to get the CROYA name out. And everyone you see in the crowd you know; the parade’s fun.” Katie Malcolmson says “All the commotion makes it so fun to walk; and representing CROYA just feels important because everyone seems to know what CROYA is. We do a good job getting people involved”. 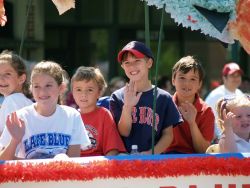 Leann Asma created the theme, “Lake Bluff’s a Blast”, and was also her neighborhood’s float construction manager. Leann says that in past years she had noticed how few traditional floats there were. She easily found chicken wire, tissue and streamers online, saying all was done on short notice. She says, “We go about life just waving to the neighborhood…but everyone wandered over to help.” Dana Warren was one of those wanderers who stopped in to view the progress and stayed to hand-letter the entire back of the float. Kathy Warfield says, “We had lots of families and lots of kids put in time. It took a week and a half and it was truly a neighborhood effort, with pieces assembled in various neighbor’s garages. Even the younger kids helped stuff tissue into the chicken wire.” Like her neighbors, Chelsea Lee loves the parade, saying “I’ve been in the parade a lot over the years; I always know where I’ll be on the 4th.” 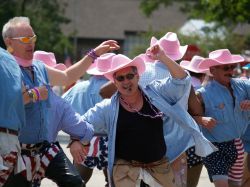 Casey Pristou has marched with the mowers for most of a decade. Casey says he really loves coming around the first corner and seeing the excitement in the crowd’s eyes. He says, “Every year we try to walk a tightrope between entertainment and controversy. Our single biggest issue is what’s humorous. We stress over that.” In their float, “Brokeback Mowers” came to life with pink cowboy hats and sheep-faced lawnmowers covered in cottonballs. Inspiring both laughter and dismay with their more risque accessories, the mowers also sported a sign crisply stating “free to make fun of everyone.” Christian Erzinger says, “We look for what is topical, and what we can implement. Sometimes we have great ideas but we can’t figure out how to get them to work.” Bob Morrissette agrees, saying, “There were a lot of ideas tossed around, it was a collaborative effort…and then the usual suspects marched.” 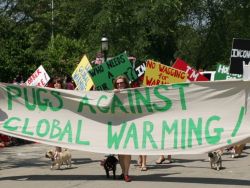 Marching with her dogs for the first time in 2005, Lisa Doyle says “the original idea was to express concern over teardowns in Lake Bluff…but I don’t remember how two and two came together” and the pugs became the standard bearer. Perhaps because, as Lisa phrases it, “they are comical dogs …they bring a smile to your face.” Mary O’Brien gives Lisa full credit for the float concept, saying she, her husband Dennis, and their three pugs used to live on the parade route and party, but they love to march now. “We’re on board for next year,…I love the parade.” For 2006 the group was considering featuring global warming, but it was the theme “An Inconvenient Woof” that sealed the deal. Jennifer Beeler marched with her two dogs, and though Frango was dressed as Wonderwoman, Jennifer notes that “a mile can be a long walk for dogs with little legs, but we kept finding water bowls placed in the line of march.”

Cathy McKechney is generally credited as the creative genius behind the Vliet’s float entries, but this year Irene Ratliff convened the coven, saying, “We gathered ‘round the fireplace and decided to use a cauldron to invoke the spirits.” The theme for last year’s float was to advertise the Vliet’s biennial Ghost Walk, so featuring witches was a must. Pam Russell says parade day began at the McKechney house where the witch faces were greened by Middle School drama teacher Stacey Guastaferro and her student cadre. Along the parade route the group danced around the smoking cauldron and chanted. Sheila Leahy says, “We were excited about the smoke bombs in the cauldron, but we had no idea how stinky they would be.” Kim Beck says, “We were all hot and sweaty at the end”, and her high-heeled pointy witch shoes came off in a hurry. Pam Russell says, “Some of the crowd sure must have wondered what witches were doing in the 4th parade.”