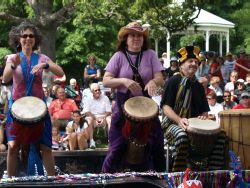 Drumming atop a bouncy moving truck bed is a challenge, says Beth Pestka. “The starting and stopping can be a real surprise.” But the weather was absolutely perfect “and we all commented on how fast the parade went by. We just weren’t ready to stop! We always find some rhythms that are good,and people are dancing and clapping and up on their feet.” The musicians trade off instruments, a combination of West African djembe and dun-duns drums.Denise Rose says, “We just kept playing the whole time, and our hands felt it”. Describing She-Boom as a bunch of middle-aged women who play non-profit events for the fun of it, Denise says, “It’s part of our excitement that we can expose so many to West African drumming. If you have an open ear it’s hard not to be active, because it’s is a participatory event.” 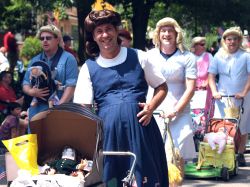 The Mower’s parade theme is always a conversation starter. Christian Erzinger says, “We just rely on the stupidity of others to provide fodder. We have great ideas. They can go stale, though, and we are always topical”. Last year the mowers parodied the raid of a polygamy compound in Texas, and dressed in drag, pregnant. Uber mower Bob O’Neill’s grandson Eddie marched, and was a good sport about dressing as a girl. Archivist Brenda O’Neill says, “Many families have participated over the years. The planning is the most fun, and it’s right in our backyard.” Alex Moss, a 6th grader, thinks being in the mowers “is kinda cool. I’m the 3rd generation….Some of the people watching thought it was really funny, but one person booed at me.” Alex is okay with that, saying, “Dad’s been booed at least five times!” 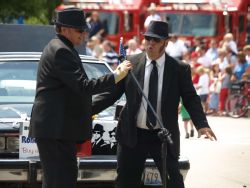 It was the 30-year anniversary high school graduation for two former North Avenue boys. Last year was also the 30th anniversary of the Blues Brothers first performance on Saturday Night live. So, naturally, Kurt Moreland and Tony Comer staged a reunion tour. Kurt, played Jake, and did his share of cartwheels in between “takes”, though his biggest challenge was to find a suitable blues mobile. Tony, as Elwood did splits along the route. Kurt says, “We’re like Penn and Teller. Tony always volunteers for the physical side. And I promise you, ‘Elwood’ had difficulties walking the next day.” After several decades of parade antics the North Avenue boys do know how to create a memorable float. But Kurt plans to bow out after the 100th parade next year. “I sure hope someone carries on.” 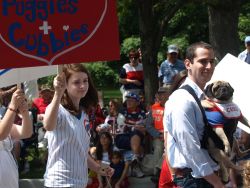 Scott Petty’s family marched in the parade for the first time last year. Scott carried his rescue pug Bogart in a baby carrier, saying “The kids would run out and grab his paw and coo at him.” And laugh when Scott asked, “Can you see the family resemblance?” The diminutive dogs always inspire smiles when their “float” pads by, but last year the pugs also took their bow-wows as a feature story in the Chicago Tribune, too. Maddie Doyle says getting ready for the parade is always a last-minute sprint. “Every year we say, ‘Should we hang out or march?’ And every year we say let’s do it!” Maddie thinks the parade preparations are the most fun… “making the signs and seeing all the pugs together.” Yes, the dogs brainstorm, too. As Maddie points out, “Pugs are very human. Pugs even have human names.” 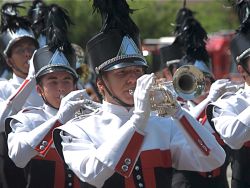 2008 Band Director Ken Wiele says, “Lake Bluff is so unique. When we round the corner and there’s that mass of people….I get goosebumps every time. And the reverb in that spot is so great.” Blackwatch is one of the senior musical groups in the Kenosha Unified School District dynasty, and celebrated their 30th anniversary last year. The student musicians play an intensive summer tour to fund their competition season. Last year’s 4th of July appearance in Lake Bluff was followed by parades in Skokie and Morton Grove. Ken is giving his director reins to Karl Mueller for 2009; he says “We always look forward to this day.” 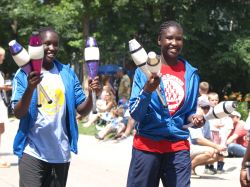 Known as the CGO, or Chief Goof-Officer, Pauly Miller’s motto is to “build self-esteem through circus arts.” Cornell Freemey is a CircEsteem alum who attends ISU, and works the big wheel on ice on cruise ships during his vacations. Cornell says he “loved gymnastics, so I tried CirceEsteem….and I’ve been teaching there since I was 12”. Lake Forest resident Cora Seibert has performed three times in the Lake Bluff parade, juggling or unicycling. She says, “It’s fun when friends yell out my name…and we love having the Circus Band near us.” Currently offering classes at Lake Forest Country Day School, Pauly says, “Our years at Gorton opened so many doors…We now have 15 teens on staff, and we match their college funds dollar for dollar….but we need to leverage every resource.” 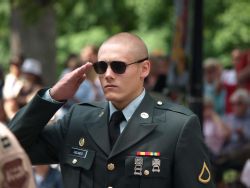 Meg Georgevich was one of several bankers who popped popcorn and marched in the parade, saying, “You see a lot of people you know”. She notes a number of the bank tellers march, and they are hailed by many in the crowd. It was Sally Peterson’s first parade, with her husband and two daughters. She says, “It will be our new family tradition to either watch or be in the parade”. The float guru was Patti Hansen; she included NTB families, clients, and veterans, and also invited soldiers home on leave to join the float. Glenn Holmes, father to Matson (pictured above) says the battalion will return to Iraq in January. Martha Hinchman credits the troops for providing “a moving experience… the number of people who stood up and clapped was heartwarming.” 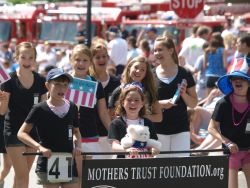 Catherine Driscoll says, “One thing I loved about last year’s parade was the number of people who yelled out, ‘We love you! We love what you do!’ That was a nice surprise.” The Mother’s Trust mission is “making a difference one child at a time”. The float advertised their annual fundraiser, The Betty Bash, with “Vote For Betty” signs in pink, white and blue. Income from the event funds items like eyeglasses, clothing, school supplies, and even summer camp tuition. Executive Director Cheri Richardson says, “We will consider anything and we try to act immediately.” The volunteer board meets weekly to review requests from social workers, which are often emergencies. Gwenny Driscoll and Catie Slaughter carrried the float’s banner with Elie Brady. They enjoyed hearing so many friends in the crowd yell hello. 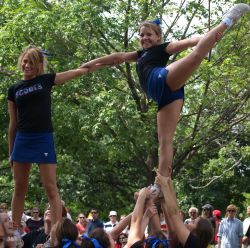 Hayle Murrins says, “The crowd really liked our tumbling. They would yell ‘Keep going’, and they yelled our cheers back at us.” Caitlin Guy agrees, saying, “Our hands were so red from the tumbling”. Allie Stride remembers the 4th as special because “It’s fun to do it as a whole group, with the JV.” The girls collaborate with Head Coach Jody Elliott Schrimmer to develop their routines for the parade and cheer camp, combining cheer, dance, and stunting. After the parade, the girls worked at the Family Fair in Artesian Park. Therese Figliuo says, “The dunk tank was really fun, but the water was sooo cold!”